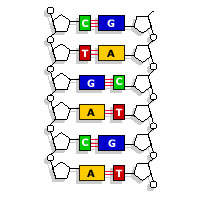 So how long can DNA or even cells survive in the environment once an organism dies?   This has been a topic of considerable debate in the scientific literature since the advent of high-throughput DNA sequencing techniques.  This growing field of scientific inquiry is fascinating to me and promises to shed new light on old questions.  I have read much of the scientific literature on the subject partly because I teach a genomics course and we spend quite a bit of time talking about ancient DNA (DNA that can be recovered well after the death of an organism) and what we can learn about genomes from ancient and even extinct organisms.

I would like to make a few observations about ancient DNA studies because they continue to make news and are a source of confusion among the public and especially young-earth creationists.  This is especially true with respect to reports of DNA found in ancient hominids.  (A mitochondrial genome sequence from a hominin from Sima de los Huesos).  DNA has been obtained from bones from deep in sediments in a cave in Spain and the mitochondrial genome sequenced from that DNA. This genome is a small 16,000 bp genome that we all have in the mitochondria of our cells and we inherit only from our mothers.  That bone in the cave has been dated to 400,000 years old and was thought to be the remains of a relative of the Neanderthals. However, the DNA sequence was more similar to that of the enigmatic Denisovan lineage of humans.  The Denisovan’s are known only from DNA from a single tooth and bone found in Siberia. No one knows what they looked like but they had DNA that is distinct from Neanderthal’s and all modern humans alive today.

The young-earth response to such reports of ancient DNA can be summed up in an article posted on the Answers in Genesis website by Dr. Elizabeth Mitchell (Iron key to preserving dinosaur soft tissue). Here she puts a new spin on the now familiar YEC mantra about how soft tissue preservation and even DNA preservation proves the earth must be young.   Let me give Dr. Mitchell credit for admitting that Dr. Schweitzer has come up with some compelling arguments for how soft tissues and biomolecules like collagen could be preserved for very long periods of time.  There have been many young-earth creationists who have greatly exaggerated how weak biomolecules can be.  For example,  I was at a conference a few months ago where a young earth speaker actually said that tissues and DNA couldn’t survive more than a few years even under the best conditions.  This flies in the face of direct observation and testing.   We have recovered DNA from thousand-year-old mummies and even neanderthals.  I have personally extracted DNA molecules from dried plant tissues more than 80 years old.

Interestingly, Mitchell, using Dr. Schweitzers research, attempts to turn the table on the common YEC mantra that biomolecules are short-lived by appealing to Schweitzer’s evidence that iron molecules are stabilizing cellular structures in fossils.   She seems to imply that young earther’s should expect to find DNA and other biomolecules in fossils of all ages since all fossils are 5000 years or less old.

On this point her logic is sound.  If proteins and DNA can survive for thousands of years and every fossil is less than 4500 years old then soft-tissue/protein/DNA preservation should be a common occurrence.

However, I would suggest that Dr. Mitchell hasn’t thought through all the implications of ancient DNA. No doubt, DNA does begin to degrade after the death of a cell (actually is degrades during the life of a cell as well, but our cells continually fix it though mistakes can be made).  So how long can DNA outside of cell last in the environment?

It depends very much on factors such as temperature and moisture but there are many other variable as well, some of which we don’t fully understand at this time.  What we do know is that it is possible to extract DNA from most un-fossilized bones with the possible exception of those found in very hot and moist environments.  As a result we have obtained partial and even complete genome DNA sequences from thousands of individual humans that have died in the past century and several thousand years.

DNA from bones that have been carbon-dated to more than 10,00 years old, such as Neanderthals, have also yielded DNA sequences.  However, this process is much harder because the DNA extracted from these bones is far more degraded.  Rather than being broken in to pieces 10s to 100s of thousands of base pairs (bp) in length, Neanderthal DNA has degraded into very small fragments.

A combination of age plus environmental conditions results in greater degradation of DNA molecules.   So it becomes more difficult to extract and sequence DNA but we have made great technical strides in recent years. As a result, scientists have obtained complete, or near-complete, genome sequences of Ice Age mammals including, mastodons, cave bears, horses, rhinos, and many other extinct organisms.

What happens when we examine fossils which are conventionally dates to be hundreds of thousands or millions of years old?  We see that these have far fewer biomolecules preserved and even less DNA which is far less stable than some proteins. In some cases individual nucleotides and other pieces of DNA are present but they no longer form chains of more than 2 or 3 nucleotides that can be sequenced with current technology.

Look at the chart below. I threw together some data that represents just a small portion of we know about ancient DNA. I have focused on some of the better-known samples.  I have indicated how old YECs think the samples are and compared them with conventional dating methods.  What you should notice and what Mitchell and others at Answers in Genesis seem to be blind to (or turn a blind eye to) is that we have obtained sequence from many hundreds of bones and teeth from organisms that are certainly many thousands of years old.  The bottom line is that essentially any organic remains less than 5000 years old is likely to contains some DNA unless it has experience very hot and moist conditions during that time.  If objects that both YECs and secular scientists believe are 4000 years old contain DNA that is relatively undegraded, then logically YECs should be arguing that nearly all fossils should contain some remnants of DNA and certainly they should contain other more stable biomolecules such as collagen.

If known samples that are thousands of years old can yield fairly good ancient DNA samples why then are bones from a cave that YECs believe must believe are 4000 years old or less yielding DNA that is horribly degraded and nearly impossible to sequence?  There are hundreds of thousands of fossils or extinct mammals that secular scientists date to be a million years old or older that young earth creationists believe were preserved in sediments laid down AFTER the Flood during a single ice age. In their model of earth’s history these fossils can’t be more than 4500 years old and many are likely less than 4000 years old.  However, bones dated more than a million years old have yet to yield any significant amounts of sequenceable DNA*.  A YEC should find this very shocking given that human bones that are 4000 years old readily yield DNA. Their model predicts that DNA should basically be present in all post-flood bones and probably even in all Noahic flood bones since they are only 5000 year old.

The abundance and quality of DNA found in bones of decreasing conventional age is not surprise to secular scientists. This is exactly what they would expect to find.  Bones of Neanderthal’s dated to be 30,000 years old would be expected to have highly degraded DNA compared to bones of modern humans from the same cave but found in sediments well above the Neanderthal bones. And this is the general trend that is observed.  YEC generally believe that all the bones in European caves were probably deposited by visitors within just a few hundred year period. They have no prior reason to expect that the DNA quality would be very different between these bones and nor would they expect that the Neanderthal bones should yield such different sequences.

The field of ancient DNA sequencing is still young and the chart above will change in the coming years as more samples are sequences and sequencing technology advances. But the striking lack of DNA from very old samples is not likely to change radically given current methods have been applied to many of these old sample with no success. This suggests the preservation in samples dated to be much older is much worse than that in young samples. But YECS think all the samples are the same age. They need to explain why there should be any correlation between radiometric dating and DNA preservation at all especially since they don’t believe radiometric dating is valid.

Finally, you may have heard about a recent report in which scientists were able to extract and sequences pieces of DNA from soil samples in caves.  By taking soil samples from caves which were already known to have been inhabited by neanderthals or archaic humans they were able to pull pieces of DNA right from the soil and match them to sequences that had been generated from bone samples.  This demonstrates the remarkable ability of small pieces of degraded DNA to survive in the environment for tens of thousands of years.  If DNA can survive in dirt then is should be able to survive in dinosaur bones from 4500 years.

*I expect that with improved sequencing technology we will eventually be able to generate sequences from DNAs that are well in excess of a million years.  Organisms in permafrost conditions may well yield DNA that has survived many millions of years albeit still in highly fragmented form.  Since we don’t fully understand all the mechanisms of DNA degradation it would be unwise to conclude that we will never be able to find bits in intact DNA sequence that are potentially much older. However, I think it is safe to say that such finds will be rare and require specialized preservation conditions (eg. biomocules in dino bones preserved by iron molecules as demonstrated by Dr. Schweitzer:  Schweitzer, M.H. et al., A role for iron and oxygen chemistry in preserving soft tissues, cells and molecules from deep time, Proceedings of the Royal Society, B: Biological Sciences 281(1775):20132741, 27 November 2013 | doi: 10.1098/rspb.2013.2741)

Even hot and dry environments don’t necessarily degrade all DNA quickly.  Here is a very recent paper in which dozens of 500 to 5000 year old camel samples were sequenced from bones found in the desert. They also sequences a large portion of the genome of an extinct camel dated to be 20,000 years old!  Mohandesan, Elmira, Camilla F. Speller, Joris Peters, Hans‐Peter Uerpmann, Margarethe Uerpmann, Bea De Cupere, Michael Hofreiter, and Pamela A. Burger. “Combined hybridization capture and shotgun sequencing for ancient DNA analysis of extinct wild and domestic dromedary camel.” Molecular ecology resources 17, no. 2 (2017): 300-313.

This is a revised and updates version of an article I wrote in 2013.

6 thoughts on “Where’s the DNA? Young Earth Creationism and the Search for Ancient DNA”