John Ray (1627-1705) was the preeminent natural historian of 17th century England.   He published many important works on botany, zoology, fossils and natural theology.  He is often given credit for proposing the first modern definition of species, for setting the stage for modern taxonomy and establishing the basics of the scientific method.  More importantly, Ray was theologian and naturalist who wrestled with the meaning of nature in the context of special revelation.  Working in a time of the reformation in England his puritan sympathies resulted in his not signing the 1662 Act of Conformity thus costing him his faculty position.   As a result he turned to studying and writing about nature and theology.

Theology and science, religion and politics, were all intertwined during the seventeenth century and thus Ray commented on all them and his writings reflect and anticipate many of the debates that continue today within evangelical Christianity.  As aptly noted by one commentator: “John Ray represents a middle ground, maintaining both scientific and theological mainstreams. He expressed remarkably modern perspectives for his time, steered between extreme speculation and dogmatism when both were particularly rife, and influenced future investigators. His open-minded willingness to follow evidence, remain flexible, admit and correct error, sets an example for biblical scholars and scientists alike.”1  For more on John Ray’s influence during his day and since please read the article:  Shining through the Centuries: John Ray’s Life and Legacy. 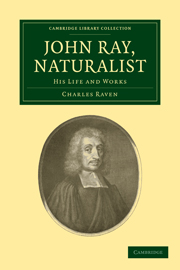