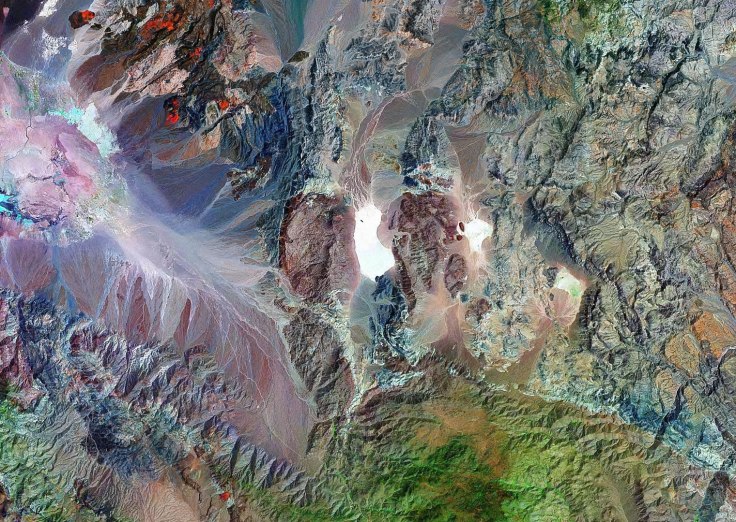 I love interesting geological puzzles that many mysterious landforms and features present to us.  Below are a few images of a landscape that show large rocks sitting on a flat, dry, lake bed.  Notably there are what appear to be skid marks in the dry lake sediments leading to each rock.  This should make anyone scratch their heads and ask, how did that happen?  We might also ask, when did the events that lead to the current state of these rocks happen?  Geologists have proposed a number of hypotheses and have gone about testing some of them which has brought us much closer to understanding the history of this location.

Based just on the observations made from a few pictures and visits to the site many hypotheses could be proposed.  For example, maybe the rocks are a prank like the crop circles in Britain.   Maybe the rocks were pushed their by local animals.    Maybe wind pushed the rocks to their present location. Maybe the rocks are far lighter than they were pushed by water to their present locations.  Maybe they were moved by vibrations from earthquakes like the rubbing boulders of the Atacama desert valley which I have written about.

As we think of possible answer more questions start to crop up:  Did the rocks all move at one time or did they arrive at their positions by slow processes?    Was the ground dry or wet when they moved?

To distinguish between these hypotheses many more observations can be made and some hypotheses eliminated as a result.  Let’s look at more of what we now know about these rocks.

These “sliding” rocks are found on several playas (dry lakes) in Nevada and California however there are similar rock “racetracks”  found in other places in the world.  These locations are all playas which are some of the flattest natural surfaces on earth.  Racetrack playa found in Death Valley National Park in California only rises about one inch over 4 1/2 miles!!  Playas such as this one were created in desert valleys with no natural outlet. Normally very dry, when there are thunderstorms water from the surrounding mountains comes down into the valley bringing new sediments which have filled the valleys to eventually produce very wide but very shallow lakes. Since all the water leaves via evaporation salts are precipitated out of the water frequently leaving a whitish surface.   The satellite image above shows a mountainous surrounding death valley that has several of these white playas.

In  2010 a group of university students set out to collect data at this site in an effort to distinguish between the various competing hypotheses for the origins of these rocks and their “racetracks.”  Some hypotheses can be dismissed quite quickly without much experimentation or additional observation.  For example, you can see the “tracks”  leading to the rocks are not found in combination with other tracks of humans or animals that might have been pushing or pulling the rocks.  We can also reasonably conclude that they rocks were not thrown to their positions by volcanoes or somehow rolled down the mountains to their current positions as there are tracks on the lake bed surface indicate the rocks did not simply land at or tumble to their present position.   Also, notice that sometimes the tracks leading to the rocks do not follow a straight line but rather make several abrupt changes in direction.

Recent observations and some tests have shown that the rocks have moved within the previous year. Some moved up to a few inches.  Oddly, some of the larger rocks were shown to have moved further than the smaller rocks which might seem strange since they are heavier. However, when one should consider that one of the forces at play in these locations is very strong winds. It could be that larger rocks have large surface area and sit up higher and so catch more resistance from the wind that can reach up to 150 mph at this location.    Presently the best supported hypothesis is one that proposed that a combination of wet clay, high winds and possibly ice combine to produce conditions that allow even 700 pound rocks to be pushed very slowly across this nearly perfectly flat surface.