Do you remember the debate between Bill Nye and Ken Ham back in February? Probably, but if it is becoming a hazy memory then that’s a sure sign you aren’t visiting the Answers in Genesis website often enough.  For if you were, you could not forget.  For a month after the debate AIG had a daily stream of articles and blog posts devoted to dissecting and spinning every single aspect of the debate. Videos and study guides were produced and sold, I assume, by the thousands.  That is understandable, the debate was in part a marketing strategy directed mostly toward the young earth creationist community.  It was a device designed to bolster the convictions of the faithful and most importantly a means of getting them to once again open their pocketbooks and donate to the then floundering Ark Encounter project.  The debate seems to have been a success with respect to these goals.

A month or two of attention in the aftermath of the debate is understandable.  I don’t begrudge Answers in Genesis using the debate as a focal point of articles or even fundraising.  But seven months later the continuous stream of articles, books and references to the debate from AIG and Ken Ham in particular suggests an interest bordering on complete obsession.   Here is a list of the major articles published in the past 2 months on the AIG website. 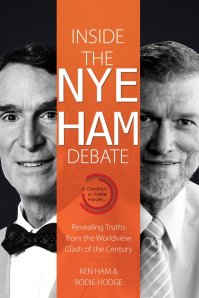 Bill Nye Likens Evolution to the Alphabet by Dr. Elizabeth Mitchell on September 19, 2014

Shades of Nye in Attack on Australian Homeschoolers by Ken Ham on September 11, 2014

Destruction or Salvation: What Motivated the Nye-Ham Debate? by Troy Lacey, and Bodie Hodge on September 5, 2014

Many of these articles are building up to a new book by Ken Ham and his director of operations son-in-law Bodie Hodge about the debate.  I am sure when that comes out there will be another flurry of activity.   Many scientists complained that by accepting to debate that Ken Ham would gain respectability in the eyes of the audience that he cares about.  I too was worried but saw the debate as a chance to have Ken Ham exposed to his Christian audience for some of the things he has been saying for years.  Many of these ideas Christians may not have realized were slowly becoming part of the young earth dogma.  For example, his attempts to change the meaning of evolution and suggest massive rapid evolution over a short period of time to form millions of species.  My review of the debate focused on this and his misuse of the term historical science.  (YEC Biblical Evolution:  I Have a Book that Says Otherwise and Testing the Creationist Hyper-evolution Orchard:  Canines, Felines and Elephants, and Historical Science and the Case of T. rex’s Puny Arms).

However, those that criticized Nye for his involvement can be excused for thinking they were correct.  Ken Ham has leveraged this debate into millions of dollars which will finance a number of new projects.  He has solidified his base by providing a rallying cry against secularism and atheism.  I did a quick search of the AIG site and found over 2200 articles referencing Bill Nye.  A search for Bodie Hodge a regular contributor at AIG finds only 700 hits. Their primary research scientist Dr. Snelling only 1700 hits. You might think that Richard Dawkins might elicit more talk than Bill Nye but I find only 648 mentions.   Clearly Bill Nye has become public enemy #1 for Ken Ham.  I was never keen on Bill Nye being the defender of science given his own obsession with the salvific character of technology, rather soft defense of historical science, and utter lack of understanding of biblical hermeneutics. Combined with atheism he was the perfect foil for Ken Ham and Ken Ham will never let anyone forget the night of February 4, 2014.

A couple of reviews of the debate in case you need a reminder of what happened can be found here:

Ham and Nye Agree: Ken Ham’s Creation Model is Not Scientifically Viable.  From Age of Rocks.

Ken Ham vs. Bill Nye – An analysis of a lose-lose debate.  From JW Wartick